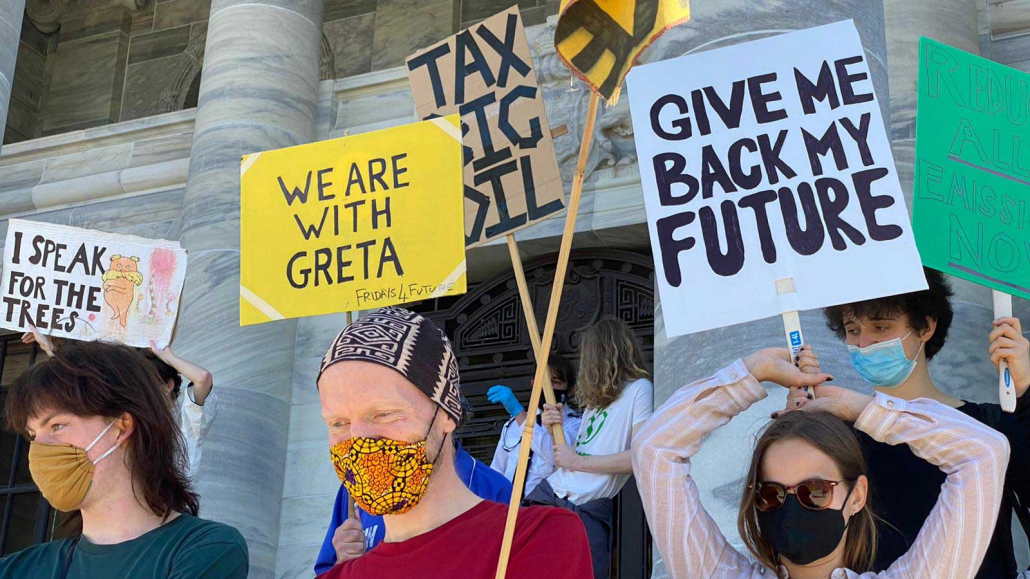 We have before us a pile of rubble (the Jewish temple in Jerusalem was destroyed by the Romans in 70 CE) to remind us of the world of Luke’s first hearers/readers.

Scholars refer to our passage from Luke as the “Little Apocalypse”.

What I have to share today comes mostly from a little book entitled Facing Apocalypse (2021) by process theologian Catherine Keller. The book offers a “dream reading” of Revelation, just one of many apocalyptic writings of the late first and early second centuries. Its insights are certainly applicable to Luke 21.

“Mindfulness of the apocalypse,” Keller writes, “can keep us from acting it out in private despair or collective inevitability, playing it out subliminally in our economic habits, democratic disarray, and ecological suicide. We have a chance of pausing the self-fulfilling prophecy of doom …

“The eery synchronicity of the ancient imaginary with contemporary history does sometimes give one pause. As it has throughout history. For example, the pale green horse of John’s vision carries the fourth horseman of the Apocalypse, releasing the inhuman force of ‘pestilence’. Plagues have frequently and with terrifying effect galloped across the world. In John’s vision the green horse is soon followed … by the opening of the seventh seal, which … warns of the destruction of forests, oceans, and fresh waters.

“To mind such metaphors is to recognise that John is not predicting future facts. But he may be revealing deep patterns. We read the images for meditation and for confrontation. Might facing the Apocalypse in its ancient intensity help us face apocalypse in our own time? Such ‘facing’ would not mean mere recognition, submission, acquiescence. It means to confront the forces of destruction: to crack open, to disclose, a space where late chances, last chances, remain nonetheless real chances …

“[Revelation’s] dramatic mode of anti-imperial witness belongs to the movement of Jewish apocalypticism, which was not some marginal bit of extremism but a late metamorphosis of Hebrew prophecy …

“We do not read the old scroll for its own sake. Rather, we let its old imaginary, directed at its own context, release surprising relevancies for ours. And we read them not because the ancient visions predict present realities … prophecy is not prediction. If in some surreal sense their author does prophesy it is not because he was seeing the future. Only what already exists can be seen. And the future is what does not exist. But deep patterns do exist in the present. And they may long persist …

“Prophecy then or now dream reads a collective context. Within the patterns of what has already become, it attends to what might yet be. Possibilities, chances, good and ill … As we read a few scraps of the old scroll we may find – in defiance of the doomsday stereotype – that its critical message carries not just high levels of inevitable catastrophe but far better possibilities …

“[N]o matter what doomsdays we face: the Greek term used in the New Testament, apokalypsis, does not signify ‘the end of the world’. Not time’s up, lights out. Close down the creation. On the contrary, it means not to close but to dis/close. To open what is otherwise shut … To uncover apocalypse – now and then – is to open multiple registers of affect. Registers traumatic and mournful, furious, festive, hopeful. And ironic.

“We will read the phantasmagoric imagery of the Apocalypse like a vast dream. We may even observe global nightmare twist toward weirdly attractive possibility …” (Catherine Keller, Facing Apocalypse: Climate, Democracy, and Other Last Chances, Orbis, NY, 2021).

Jesus says, “There are new opportunities for life and peace.”

Jesus says, “This will be your opportunity to give your testimony.”

We acknowledge the hard work and faith of those who built the church here more than 150 years ago. That’s half the story. We might also acknowledge that the land was stolen, a grant from a colonial government … also that the architecture of the church, the sandstone façade especially, expresses a certain colonial (gothic) notion of transcendence …

As we redevelop the site, the garden especially, how might we supplement this gothic symbolism – there are so many opportunities to do things differently – with other symbols and expressions of the sacred, celebrations of Wisdom … in consultation and in partnership with First Nations members, neighbours, friends … with “local mob”.

At Gospel Conversation this month, in lively response to a paper by the Rev. Dr Garry Deverell, Miriam said, “I am conscious of questions of power and intersectionality. Who is ‘local mob’? To whom are we listening and with whom are we building relationships? Are we conscious of attending to the voices of Aboriginal and Torres Strait Islander women, LGBTQI+ folk, people with disabilities?”

Francis J. Moloney writes: “Our reading of the gospel of Luke has shown us that Abba God led Jesus through his journey to Jerusalem back to God in the ascension. So will it also be with those of us who are prepared to take up the life and mission of the church. The only requirement is that we must live and love as Jesus, following him courageously … into the future …” Amen.