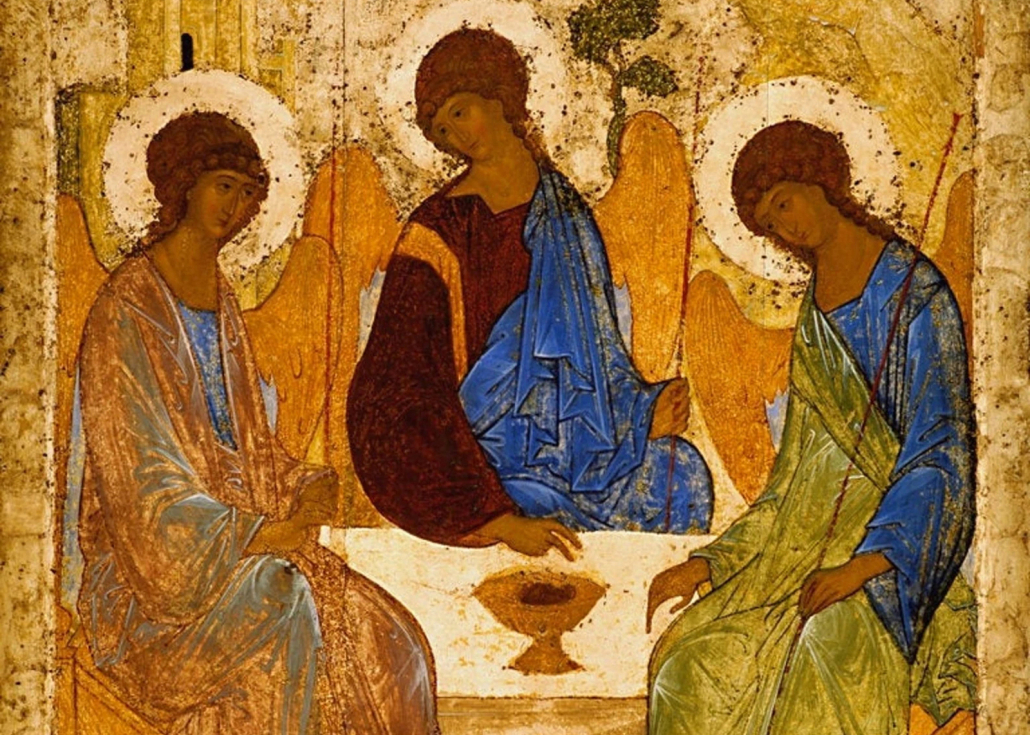 For Marg, whose glorious painting of the donkey and the angel (Numbers 22) bears witness to the special experience/intelligence of each and every creature. For Marg, who learned with patience and reverence to paint/write icons. For Marg, whose faith saw deeply into trinitarian doctrine, to myriad embodiments of truth, goodness and beauty. For Marg, with whom we shared the life and love of God.

With love for Robyn, John and Megan …

In her last days Marg liked to hear singing. Hymns and songs, including songs by Bob Dylan … I referred to this spoken-word song one time, an atypical composition from the New Morning album (1970).

“Three angels up above the street / Each one playing a horn / Dressed in green robes with wings that stick out / They’ve been there since Christmas morn // The wildest cat from Montana passes by in a flash / Then a lady in a bright orange dress / One U-Haul trailer, a truck with no wheels / The Tenth Avenue bus goin’ west // The dogs and pigeons fly up and they flutter around / A man with a badge skips by / Three fellas crawlin’ on their way back to work / Nobody stops to ask why // The bakery truck stops outside of that fence / Where the angels stand high on their poles / The driver peeks out, trying to find one face / In this concrete world full of souls // The angels play on their horns all day / The whole earth in progression seems to pass by / But does anyone hear the music they play / Does anyone even try?” (Bob Dylan, “Three Angels”).

The bakery truck driver ponders the music/message of the three angels. The driver tries to hear. The angels bear the good news of Christmas – Emmanuel, the Word made flesh – as well as the warning of Revelation 14, where three angels proclaim right praise/worship, judgement on exploitative powers, warning against participation in exploitative cults.

The bakery truck driver has bread to deliver. If this is “living bread” (John 6:35), it means eucharist – nourishment for hungry souls, sacrament for practice in Christianity, the art of hospitality …

The bakery truck driver (I give thanks for the Grumpy Baker at Maroubra Beach) seeks community, communion – orthodoxy (right praise), freedom from exploitative powers, freedom for participation in love.

The song calls to mind another biblical scene which features three angels. The hospitality of Abraham and Sarah at the Oak of Mamre (Genesis 18:1-15) inspired Andrei Rublev’s icon of the Holy Trinity (15th century). Looking into the story of Abraham and Sarah’s encounter with three angels – a theophany and promise of birth/life – the iconographer saw something universal.

Richard Kearney says: “The Christian image of the Trinity as perichoresis is a playful dance around the chora, circling about the core space of hospitality, the generative womb of Sarah and Mary, the eucharistic chalice of bread and wine.”

“Three Angels” is a song without a chorus, but the angels signify chora, in ancient Greece a space outside/beyond the polis/city. In Dylan’s lyric, “up above the street” – though we may imagine an altar-native space within.

Trinity is a playful dance around the core space of hospitality …

“Revelation of the divine is in the carnival of hospitality between the three persons opening onto the fourth – humanity. The fourth dimension involves the invitation to join the perichoretic dance – as signalled by the little mirror first inserted at the base of Rublev’s icon, where we see ourselves reflected in the divine play between persons: Father, Son, and Spirit, inviting us all to the eucharistic banquet” (Kearney).

“Dance then, wherever you may be, I am the Lord of the dance, said he” (Sydney Carter).

I really like Steven Shakespeare’s collect for today. Our God is “neither monarch nor monologue / but an eternal harmony / of gift and response”.

The icon – like trinitarian doctrine itself – is very radical in its challenge to traditional masculinist Christianity, but true to the original inclusive hospitality of Christ and Mary, Abraham and Sarah.

Excluding chora is excluding Earth, the feminine, humour, humanity. The Spirit in Hebrew is ruah, feminine, and the semitic word for mercy/compassion is reham, meaning womb. The biblical God is, at root, both feminine and masculine, both Sophia and Logos.

The three figures in Rublev’s icon are quite feminine, perhaps non-binary.

The dance is a dance of opposites and differences, of coming and going, a circumincessio, where male and female are equally welcome. As are the divine and the human.

The gospel as creative interplay, as dance (perichoresis)? The gospel in a song or poem (theo-poesis)? Yes!

Let us sing to the God who possibilizes, who makes possible this world (this world to come). In singing, may be actualise the world, that is, respond/make/mend with faith, hope and love in the actual circumstances of our lives (together). Play is a serious matter! Song and dance are high callings! Yes! Amen!

‘Vision and faith’
Scroll to top