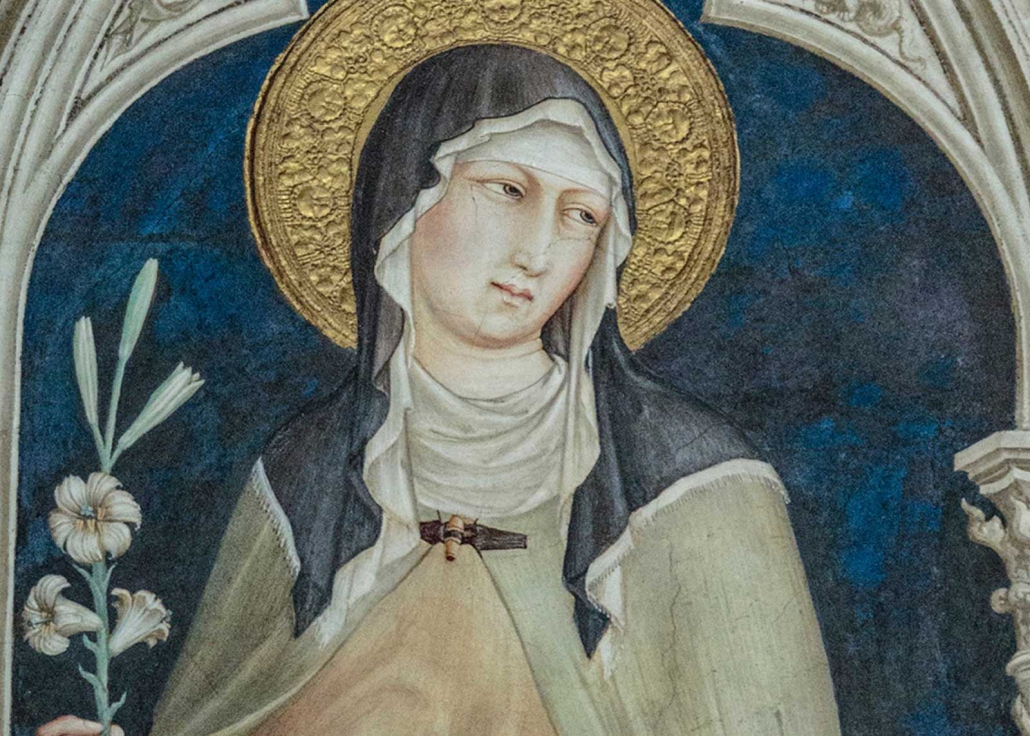 Thirteenth-century saints Francis and Clare of Assisi impress us still. There are aspects of their lives we might recall with the help of key words: conversion; rebuilding; haircutting; song-writing and letter-writing; peace-making; founding; touching and healing; preaching; stigmata; Nativity; Stations of the Cross.

Not so well known are the following “fun facts”.

Francis was born Giovanni (John) Bernadone. “Francis” was his nickname, in reference to his playing the guitar, a French musical instrument … Francis designed the habit as a basic garment for his friars. When one friar asked for shelter, Francis fashioned a hood for the habit – in Italian, a cappuccio or roof over their heads. It’s where we get the word “cappuccino” … Francis asked that part of the friary garden always be left untouched, so that wild flowers and herbs could grow there, and those who saw them could raise their minds to God, the Creator of such beauty … Toward the end of his life, Francis, who was blind, was welcomed by Clare at San Damiano’s. It was there that he wrote his famous “Canticle of the Sun” …

Sainthood is a means of honouring the lives of faithful people. Their efforts and their failures call to our own deep desires for goodness and peace.

The Apostles’ Creed refers to the “communion of saints”, which means the family of saints. We pray with them and for them, as we believe/imagine they pray for us. No matter the years or other barriers that divide (distance, culture, language), we believe in a love that binds and binds up ­– a love that attends to our wounds as to our estrangements.

Clare, we might be surprised to know, is regarded the more masculine guide, and Francis the more feminine. In a gender-bending Spirit of love, Francis and Clare are with us – our sister and brother.

In conversation with members of Franciscan orders, including Father Paul Ghanem from the St Francis of Assisi parish in Paddington, and Noel Jeffs of Eveleigh, who is also one of our SSH volunteers, I have come to appreciate how seriously Francis and Clare took their vows of obedience.

Francis, for instance, didn’t just visit the pope one time (to seek formal recognition for his order) but many times. He annoyed the local bishop time and time again. He wasn’t interested in mere permission to live a life of poverty and chastity. He was passionate about the gospel and about rebuilding the church – for everybody.

Clare didn’t just write a couple of letters. As Abbess it’s likely she never left the grounds of San Damiano, but she wrote hundreds of letters to noble men and women, bishops and cardinals. In the end, they wrote as many letters to her.

Francis and Clare might have started a sect, but instead revitalised Christian communities throughout Europe, then diverse communities on every continent.

Their sense of loyalty to the church may serve as encouragement for us to resist sectarian arrogance or moralism, so often the condition for violence. It may serve as exhortation to a more inclusive, universal, even cosmic consciousness.

In respect of our gospel, birds do in fact harvest their food, and plants do toil to create their blossoms. They just do not do these things in the same ways that human beings do. May our love be both humble and empathetic.

Moreover, “the plant sacrifices its own individual flourishing in order to generate flowers, benefiting a host of other species and providing for the next generation of plants. Plants do not spin, but they labor at the work that is appropriate to them and to their place in the larger ecosystem” (Rebecca L. Copeland).

“Even for worms [Francis] had a warm love,” writes Thomas of Celano (c. 1185-1265), “since he had read this text about the Saviour: I am a worm and not a man. That is why he used to pick them up from the road and put them in a safe place so that they would not be crushed by the footsteps of passersby.”

And may our love be wisdom-centred … the enterprise has barely begun. Amen.

‘And what do we mean by success?’
Scroll to top