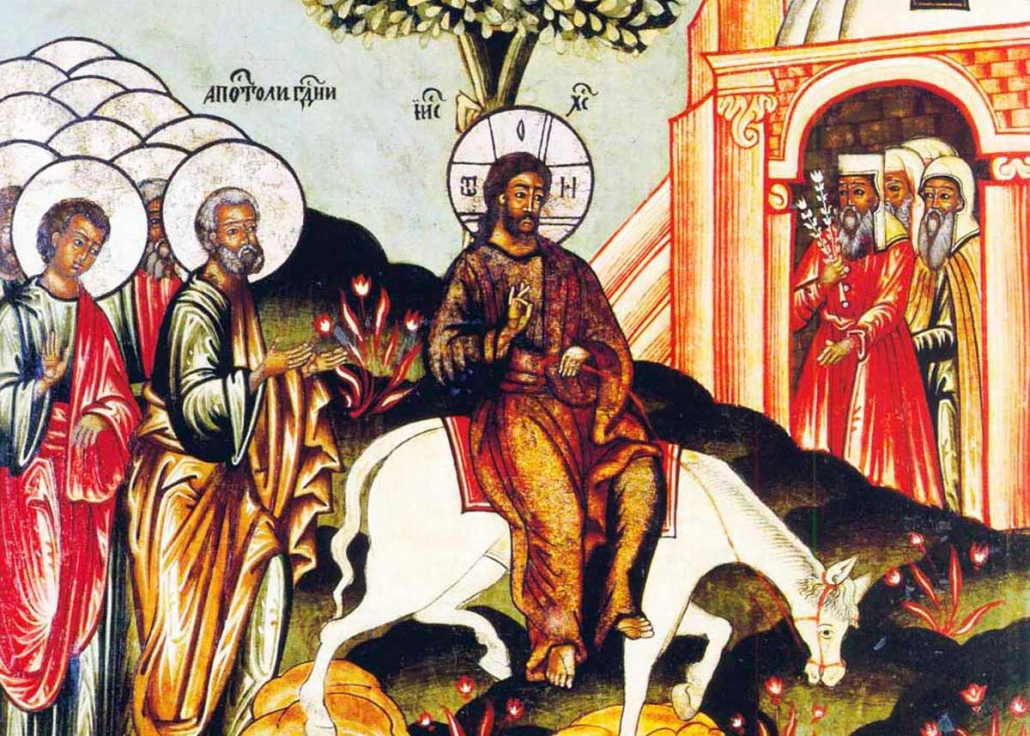 Detail: Russian Icon with a willow instead of a palm tree (18th century).

Jesus’ triumphal entry into the crowded streets of Jerusalem was a kind of performance art, an enacted parable that dramatised his subversive mission.

Given that the Roman state made a show of force during the Jewish Passover when pilgrims thronged to Jerusalem to celebrate their liberation from Egypt centuries earlier, some scholars imagine not one but two political processions entering Jerusalem that day.

In a parody of imperial politics, “king” Jesus descended the Mount of Olives into Jerusalem from the east in fulfillment of Zechariah’s ancient prophecy: “Your ruler comes to you sitting on a donkey” (Zechariah 9:9). From the west, the Roman governor Pilate entered Jerusalem with all the pomp of state power.

Pilate’s brigades showcased Rome’s military might. Jesus’ triumphal entry, by contrast, was an anti-imperial “counter-procession” of peasants that proclaimed an alternative social vision called the kingdom or kindom of God.

Twenty years or so after Jesus was executed, charges of subversion dogged his first followers.

In Philippi, a mob dragged Paul and Silas before the city magistrates, then had them stripped, beaten, flogged and imprisoned: “These people are disturbing the peace by advocating practices which are unlawful for us Romans to accept …” (Acts 16:20-21).

In Thessalonica, “some bad characters from the marketplace” dragged Jason and some fellow believers before the city officials, shouting: “The people who have been turning the world upside down are now here … They all defy Caesar’s edicts and claim that there is another ruler – Jesus” (Acts 17:7).

What were Jesus and his first followers subverting? We know that the earliest believers were called “atheists” because they refused to participate in Rome’s cult of imperial worship (and atheism continues to offer critiques of idolatry).

Jesus’ alternative rule subverted major aspects of the way most societies in history have been organised. Whether ancient or modern, most societies have normalised a status quo of political oppression that marginalises ordinary people, economic exploitation whereby the rich take advantage of the poor, and religious legitimation that insists “God wants things this way”.

It’s easy to think of other components of the cultural status quo that Jesus might subvert, like ethnic stereotypes, media propaganda, heteronormative gender roles and sexual identities, individualism and consumerism, animal cruelty and the degradation of the planet.

On Palm Sunday Jesus invites us to join his subversive counter-procession.

In a little book entitled Deeper Than Words: Living the Apostles’ Creed, Benedictine Brother David Steindl-Rast reflects on the Passion of Jesus, comparing “two sets of values – those of the kindom, as Jesus proclaimed it, and those of every domination system in history; values like compassion, beauty and truth, that we experience in our most alive moments – our peak experiences – and the values … by which the world we have created is for the most part run …

“Daily experience shows us how difficult it is to stand up for those spiritual values to which we feel committed when we are at our best. Whenever we have to swim against the current for the sake of our deepest convictions, we know why Jesus ‘suffered under Pontius Pilate’ …

“Jesus was executed by a representative of the domination system as powerful now as it was then. By putting our faith in him we express our trust that the weakness of God [divine love as weak force in the world] is stronger than human power (1 Corinthians 1:25).”

Taking Jesus as a model of faith includes discerning Christ-like wisdom wherever it is expressed. The Palm Sunday rallies – “justice and freedom for refugees” – are remarkably faithful events … “alive” moments (remarkably resistant to commercialisation).

Palm Sunday activists (ARAN) call for the immediate release of all refugees and asylum seekers from immigration detention – their claims for asylum can be assessed while they live in the community; an end to mandatory and indefinite detention; the right to work and access to Centrelink benefits for all refugees and asylum seekers; fair and timely assessment of all claims for refugee status; permanent visas and family reunion rights; safe resettlement options either in New Zealand, the USA, Canada, or here in Australia for all people, many stranded on Nauru and in PNG …

Talking to Grant on Thursday, I could picture Dorothy, her fist raised in support/honour of victims of racism, victims of prejudice and condemnation. A faithful Palm Sunday rally, we imagined, might feature exuberant acclamations (Dorothy turned 88 on April 7!), political chants as well as songs of resistance: “The glory and freedom of Ukraine has not yet perished …” Flags, banners, placards … political cartoons, palm branches, hosannas (God, save us now!).

Palm Sunday is noisy, colourful. It is also faith’s preparation for suffering love, for solidarity. From it comes the invitation to live and to die for the kindom, for the rule of love. Amen. 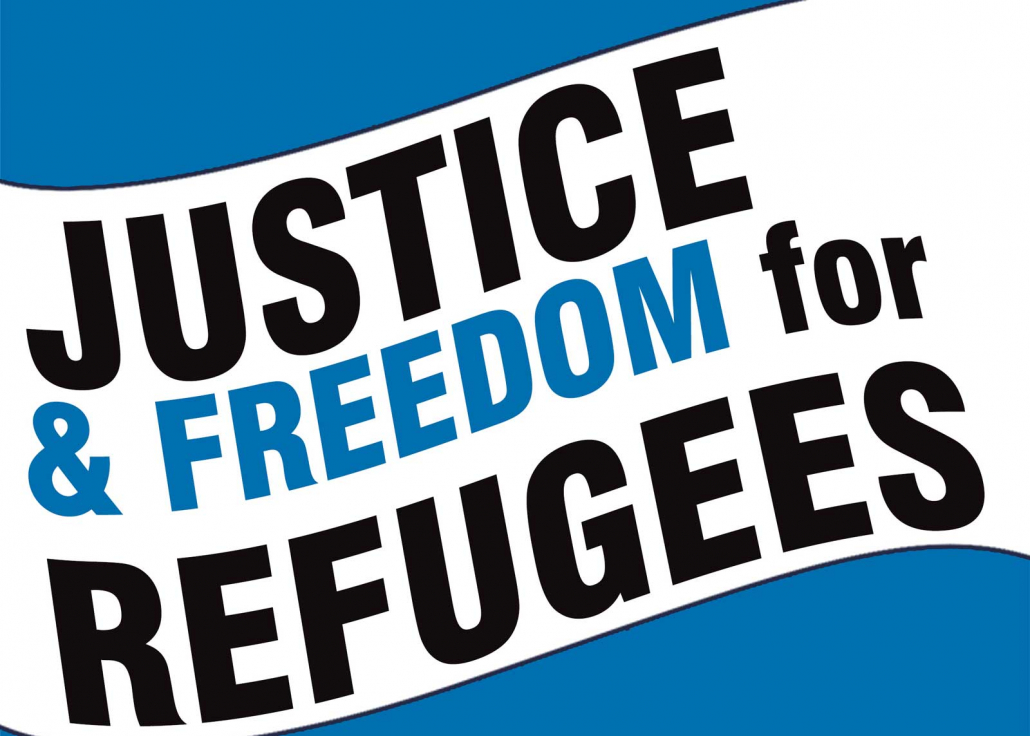