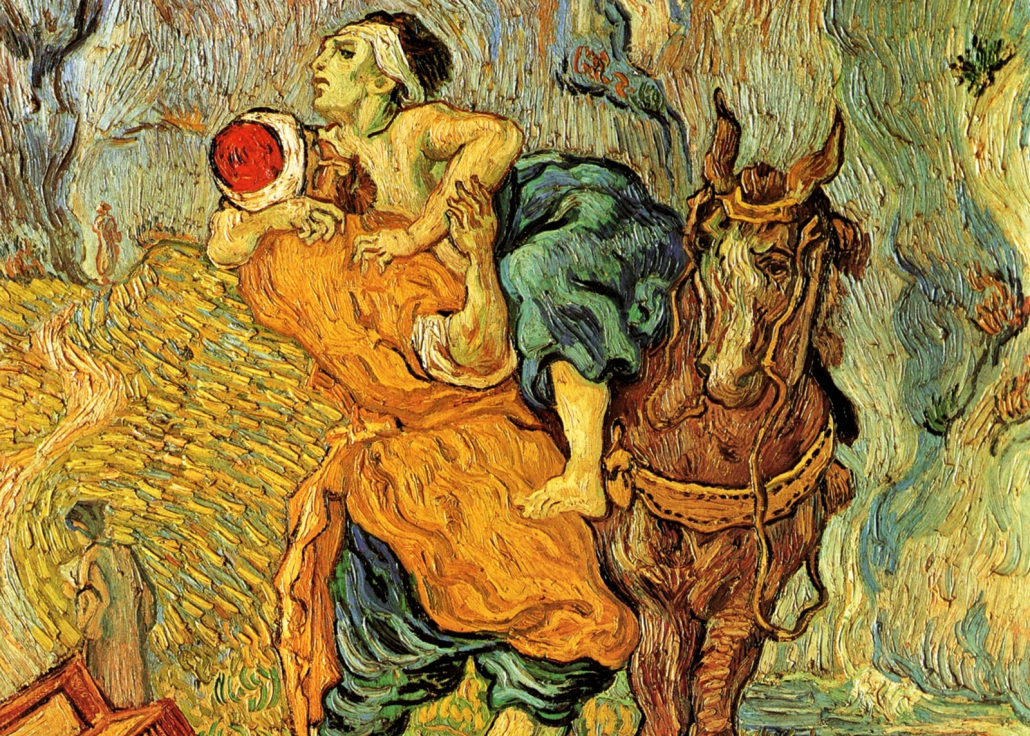 ‘Go and do likewise’

Background
A Levite is a descendant from the tribe of Levi …

Both priests and Levites were considered religious/pious. The priest was the more powerful figure …

The Samaritans claim descent from northern Israelite tribes who were not deported by the Neo-Assyrian Empire after the destruction of the Kingdom of Israel. They believe that Samaritanism is the true religion of the ancient Israelites, preserved by those who remained in the Land of Israel during the Babylonian captivity …

Some Christians, such as Augustine, have interpreted the parable allegorically, with the Samaritan representing Jesus Christ, who saves the sinful soul – the priest is the Law, the Levite is the prophets, and the Samaritan is Christ. The wounds are disobedience, the beast is the body of Christ, the inn, which accepts all who wish to enter, is the church … The manager of the inn is the head of the church, to whom its care has been entrusted …

Others, however, discount this allegory as unrelated to the parable’s original meaning and see the parable as exemplifying the ethics of Jesus.

The parable has inspired painting, sculpture, satire, poetry, photography and film. The phrase “Good Samaritan”, meaning someone who helps a stranger, derives from this parable, and many hospitals and charitable organisations are named after the Good Samaritan. 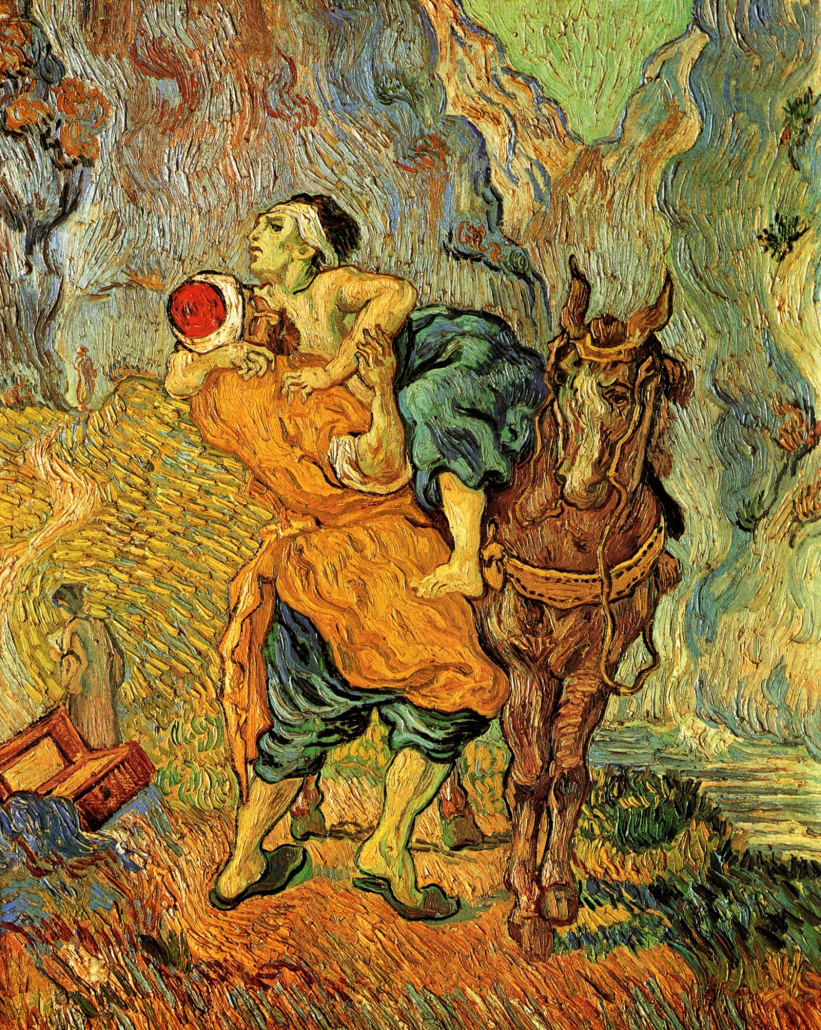 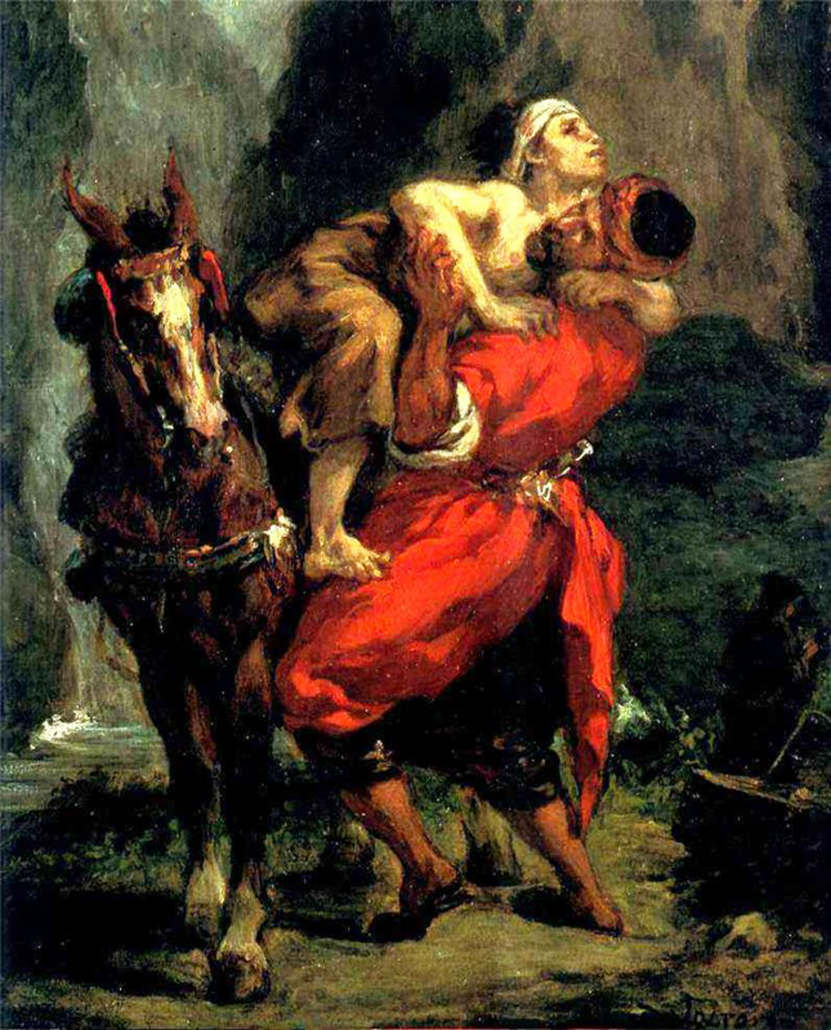 Image: Eugène Delacroix, ‘The Good Samaritan’, 1849. The man from Samaria puts the stranded traveller on his horse. Other passers-by had let the robbed man lay on the road – even though they were supposed to be more pious than the Samaritan. Delacroix here painted the figures as if he were Rubens: muscular and colourful. His own fast brushstroke can easily be recognised.

“The Bible isn’t a book that reflects one point of view. It is a collection of books that records a conversation – even a debate – over time …

“Without the crisis of exile, the Bible as we know it wouldn’t exist …

“The questions for us, as they have been for all generations, are: What is our hope? How do we yearn for God to show up here and now? What urgent thing is happening right now to us, our families, and our world? What new thing will the God of old do now?

“[T]his process of reimagining God is not a problem to be overcome, but an invitation to meet the always active, always present God here and now, where we are, and to trust that God is with us in that process. By saying, ‘This is my God,’ I am accepting the responsibility of our inevitable task of finding those sacred places where God and our world meet …

Peter Enns’ book celebrates the Bible as ancient, ambiguous and diverse (how wonderful!) – a resource for churches in pursuit of wisdom.

It seems apposite as we explore together, in and through a health and climate crisis, and a certain “exile”, wise means of caring and advocating for justice; wise ways amid fear and confusion; discerning a “sacred responsibility” as well as new opportunities …

Read the following comments on Luke 10:25-37 and assign each to one or more of the “aspects”. What further questions are raised for you?

ABNER: There are risks involved whenever we choose to help someone – discerning when and how to help – how many people to involve in the process.

CATHERINE: The key moment in the parable is the moment when the Samaritan is moved to compassion. He works out what to do from there.

NORRIE: The horse plays an important part, and the innkeeper too. Neighbour-love is about the whole community – finding help and support wherever it is needed, and affirming that.

The gospel and the song express something fundamental. Faith is a fundamental disposition, openness to the other – receptivity, mercy, kindness … love. It’s striking that neighbourly love shapes/informs whatever it means to love God (the “religious” figures in the parable fail to appreciate and act on this). God, we might say – and Christ the icon – is the neighbour.

When Jesus needed a neighbour (he was tired and thirsty), a Samaritan woman met him at Jacob’s well in Palestine (the site remains of holy significance for Jews, Samaritans, Christians and Muslims). An older gospel song tells this story from John 4.

The woman, according to Orthodox tradition, Photina, is someone with whom Jesus can talk. In a fashion deemed scandalous by patriarchal custom, they talk (publicly) about water and life, true love and worship (the most important things).

There’s a connection, an understanding, mutual affection and trust. Their conversation is layered – not simply about personal wants and individual choices but social, political …

St Augustine, among others, sees that Jacob’s well (Jacob and Rachel’s well) hints at a deeper nuptial reading of Jesus as the Bridegroom of Israel (and therefore the Church) come to reunite the divided tribes.

Photina (the “Enlightened One”) engages Jesus wholly. It’s no surprise to read, then, that she becomes a bearer of good news – an evangelist in the name of reconciliation and peace.

“And the Good Samaritan, he’s dressing, he’s getting ready for the show / He’s going to the carnival tonight on Desolation Row …”